I made some meringues today!

They’re like peanut butter choco meringues and I used this here recipe from @zoebakes and @displacedhousewife. TWO THINGS:

1. The recipe wants you to have a Pb glaze that’s drizzle-able. Well, champ, you’re gonna need more than just 1-2 tbsp of whipping cream to get a drizzle-able glaze. More like 6 or 7, y’all!!!! I mean – REALLY!

2. I had the v clever idea to just swirl the pb but write little “hi”s on my pre-baked meringues (see below) with the chocolate. But guess what? Your meringues will flatten and expand in the oven and most of what you thought was cute going in will turn into a disaster coming out. Maybe slam your tray before piping your “hi”s on to give them a quick flatten pre-bake…. that might work…. or just swirl the choco with the pb like Zoe says in her recipe and just ignore my foolishness. 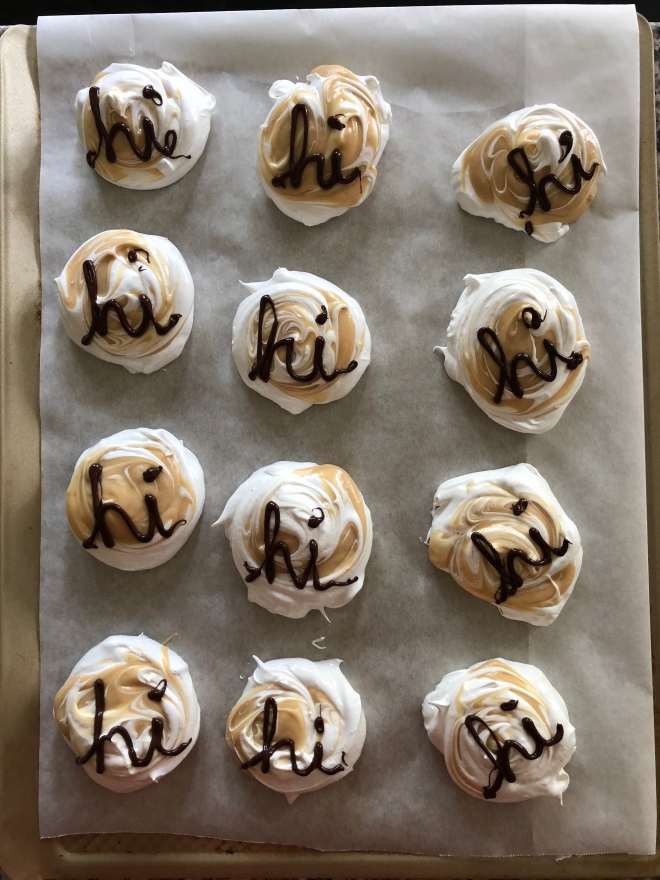 (This is pre-bake and they didn’t stay this cute…. SORRY!)

So, I’ve been seeing a therapist and he says I’m getting handsomer and more confident since we first started. Wow wow wow! Check me out, world!

Honestly, I was feeling medium handsomer too but today I went to a new barber and he gave me a shit haircut. So, now I’m back into a haircut-induced self-esteem shit spiral!

And also! Another important thing that’s on my mind! I just voted for the mid-term elections and guess what – it was a STRAIGHT DEMOCRATIC TICKET!

I have a very important message for GAYS. Hey you GAYS! Go vote! And vote BLUE, DUMMIES. I know there are some of you gays who think it’s cool to vote for republicans. YOU’RE DEAD WRONG! These people don’t think you’re equal to them and they never will. If you ever want to get married and have the same rights as all these straight mothafuckas, you absolutely cannot vote for these republican turds. Oh – and that’s literally just the very least of the issues at stake. Healthcare and women’s rights and the fucking environment and immigration…. get your heads out your butts, you republican gays!!!! Sheesh!

Wow! I feel so much better, even with my shitty haircut. I’m going to have TWO ROSÉS AND MAYBE CARVE A PUMPKIN!